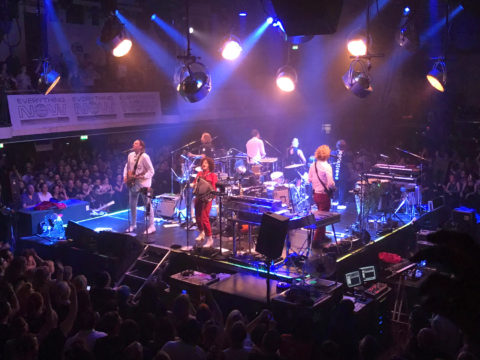 Arcade Fire are a knockout in East London

It’s been a very busy week here at SDE and Arcade Fire was a real highlight. I felt very, very lucky to get tickets to one of their intimate shows at the York Hall in Benthal Green, East London.

It’s a very interesting choice of venue – it’s basically a local authority leisure centre and a well known boxing venue. It’s TINY (feels much smaller than the stated 1,200 capacity) and totally authentic, not some hipster/millennial version of a boxing club, but an ACTUAL east end boxing club. You can see in the photo above (click to enlarge) that the band really made the most of it with the stage in the middle and as the lights went down an MC came on to introduce the band in true boxing style, with some pithiness thrown in (“tonight we bring you a true heavyweight event, not available on pay-per-view, HBO or Sky Box Office…”).

It was roasting inside the venue, but the band didn’t help matters – they were hot, hot, hot! I was a bit of a Arcade Fire late starter, I have to admit, getting into them properly with The Suburbs and going back to explore the amazing two previous two albums (still not sure about Reflektor).

Although the music was amazing (you can view the setlist here) it’s the attitude of the band towards their fans and the industry in generally that really impresses. They just seem to ‘get it’ and are having a lot of fun with the ‘Everything Now’ concept of the not-yet-released new album. Their alter-ego twitter feed @EverythingNowCo, with its mock-corporate values, is hilarious, questioning whether the band really need to give 100% of proceeds of some T-shirt sales to the Partners in Health charity (“How ’bout 50/50?”) or praising fan-created artwork with the line “Beautiful! Also totally unauthorized, please contact our licensing office in Saipan to arrange payment.”

Back to the gig though… we were upstairs (getting to old for the mosh-pit) next too a couple who (for some reason) had brought their two quite young children (probably between eight and 12 years old). Surely a total waste of money, since the kids looked bored throughout the entire concert, despite being bought ‘Everything Now’ caps!  It turned out the ‘dad’ may have been someone famous, since a few people around us were getting their photo taken with him! Apparently, Boy George and Jude Law were among the attendees, but, despite normally being quite a good ‘spotter’, I didn’t see anyone like that.

The live performance was amazing. Perhaps due to the central location of the stage and to ensure everyone got a good view (or maybe they always do it) the band were running around like maniacs, standing up and balancing precariously on stools, or keyboards or whatever platform came to hand. A health-and-safety officer’s nightmare. I do actually have really good video of the entire first song, Everything Now, but I’m too scared to upload to YouTube in case the Everything Now Corporation come down hard on me!

The album, Everything Now, is scheduled for release on 28 July 2017. 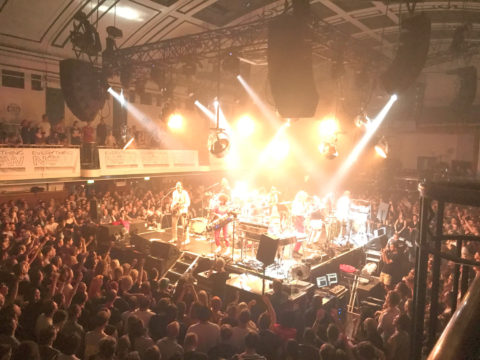