It’s the weekend! SDE is nursing a hangover and is kicking back with some stories and updates from the past week, along with gossip and news from the weeks to come…

Last weekend I was on a stag do in Bratislava in Slovakia. Obviously, the usual revelry took place… but I couldn’t resist popping into a local shop to pick up some CDs. Funnily enough, it wasn’t a record shop but rather a ‘pound shop’ stacked high with discount household items. I say pound shop – this being Slovakia it was actually a ‘Euro Shop’ so each item was the equivalent of around 72p – even better! A stack of Madonna CDs in the shop window – many of which were the 2001 remasters – drew me inside. I knew I ‘needed’ True Blue, so what the hell… In the end I walked out with both that and Confessions On A Dancefloor, both sealed for a total cost of €2. They are definitely originals before you ask!

Of course the Madonna remasters are rubbish. I realise that. Why Warners even bothered is still a bit of a mystery. On True Blue you get just two measly extra tracks (The ‘Color Mix’ of the title track and the ‘Extended Remix’ of La Isla Bonita). There is only about 53 minutes of music on the disc and so much material missing such as at least three non-album versions of Open Your Heart, the extended version of Papa Don’t Preach, the B-side Ain’t No Big Deal. I could go on. When you consider this was the same era of the Pet Shop Boys‘ excellent ‘Further Listening’ two-CD sets, it’s all rather embarrassing. The only good thing that happened was reinstating the original cover to Madonna’s first album, but that aside, these now 14-year old reissues were virtually pointless at the time and should be superseded at the earliest opportunity. 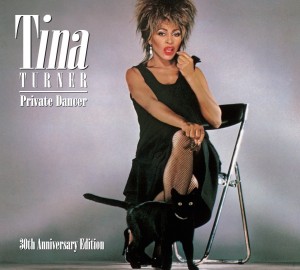 Talking of albums from the 1980s, Warner Music have this week announced a 30th anniversary edition of Tina Turner‘s 1984 album Private Dancer.

The ‘math’ fans amongst you will spot that this is actually a 31st anniversary – which perhaps suggests that the original plan was to get this out last year. A decent one-CD remaster was issued in 1997 but one disc was never going to be enough to include all the relevant bonus tracks because there were so many singles. This time around the reissue offers two-CDs which should be enough to include everything, but as you will see if you read this news story not all boxes are ticked.

This was such a big album it’s quite hard to understand why it hasn’t been given more of a push. My feeling is that pop music isn’t yet taken half as seriously a rock music with the major labels and therefore, if there are no other factors at play (the artist on an ‘anniversary’  world tour, for example) they are worried about not seeing enough return on investment if they green light a big lavish multi-disc release. The trouble is, it becomes a self-fulfilling prophecy because fans might not embrace a compromised deluxe reissue for exactly that reason – it’s compromised. So if sales expectations are not met, the executives will sit around the table and say ‘thank god we didn’t do a bigger set’!