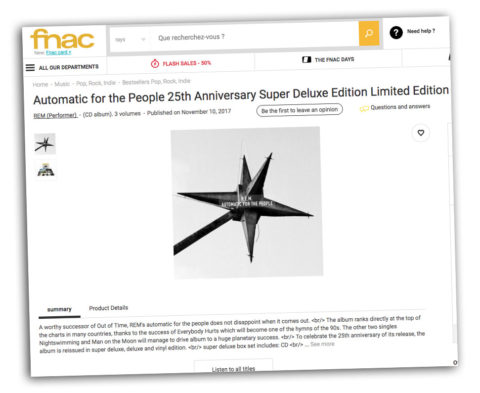 Iconic French retailer FNAC will now be available on SDE’s popular price comparison tool. FNAC is the fourth vendor to be added since the ‘widget’ (launched in April last year) which gives SDE readers ‘at a glance’ information about pricing and availability of physical music products.

FNAC – it stands for Fédération Nationale d’Achats des Cadres – sell CDs, vinyl, DVDs, blu-rays, music box sets and a whole lot more, such as as books, games and electronics, and they’ve been going strong for over 60 years. Although they have nearly 200 shops (primarily in France, but also in other countries like Belgium, Portugal and Spain) like most major retailers they’ve developed a significant online presence.

Having a powerful local competitor in a specific regions is great for music fans and much like recently in Germany, where Amazon matched Saturn’s 3-for-2 deal on music, Amazon in France will quite often react to special deals in the that part of the world, and price-match FNAC. It’s worth noting that unlike HMV in the UK, FNAC will ship worldwide.

The way this will work is that if you don’t see FNAC on a widget, it simply means the product isn’t available via the online store at that time. But if the item is on the FNAC website, it will take its place in the SDE widget and will slot into position according to how competitive the price is. Some retailers take longer than other to get pre-order listings up and running. Amazon – particularly in the UK, US and Germany – are normally very quick.

Check out the widget for the CD edition of Erasure‘s World Be Gone album (below), to see a product that has the full complement of retailers displayed. The UK, Germany and France are now all represented by two vendors, giving SDE readers a choice. FNAC sell direct, but do have their equivalent of Amazon’s ‘marketplace’ and allow third party vendors to sell new and used items as well.

There has also been some work going on recently to improve the general reliability and functionality of the SDE price comparison widget. The prices will be updated more regularly (normally within 2-3 hours) and occasional gremlins where prices go ‘missing’ (some of you may have noticed such issues in the sidebar widget) have been fixed. This work in the background also opens the door for improved functionality. Development is ongoing and one idea is to have a button at the bottom of each widget that loads a similar/popular product into the widget area. If you have a ‘wish list’ of things you’d like to see on the widget, then leave a comment and we can review and establish what the most popular are.