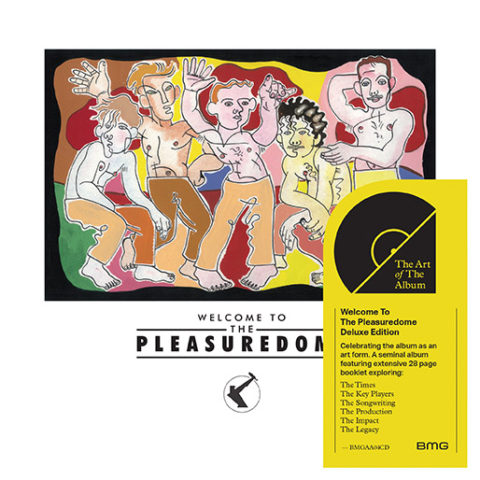 BMG will reissue Frankie Goes To Hollywood‘s 1984 album Welcome To The Pleasuredome in October under their new ‘Art of the Album’ banner.

According to BMG their ‘Art of the Album’ initiative is about “celebrating the album as an art form” and the sleeve notes (written by Paul Flynn) in both the vinyl and CD reissues will explore specific aspects to the album such as ‘The Key Players’, ‘The Songwriting’, ‘The Production’ and ‘The Legacy’ etc.

What this and other reissues under ‘Art of the Album’ umbrella don’t do is offer any bonus audio. You just get the standard album. That in itself is a fluid concept for Welcome To The Pleasuredome, since the original CD edition didn’t match the vinyl LP or cassette. However, the original vinyl track listing has established itself in recent years as the defacto ‘official’ version of the album.

The single CD release will come packaged as a hardcover book (also known as a ‘casebound book’) and the vinyl will be the usual gatefold double LP. The vinyl uses the same mastering as the Sainsbury’s white vinyl exclusive from last year and the CD is the same as the 25th anniversary remaster from 2010.

For the time being, both editions of this ‘art of the album’ version of Welcome To The Pleasuredome can be pre-ordered exclusively via PledgeMusic. They will be issued on 17 October 2017.

Pre-order Welcome to the Pleasuredome at PledgeMusic.

Welcome To The Pleasuredome – An abbreviated reissue history: