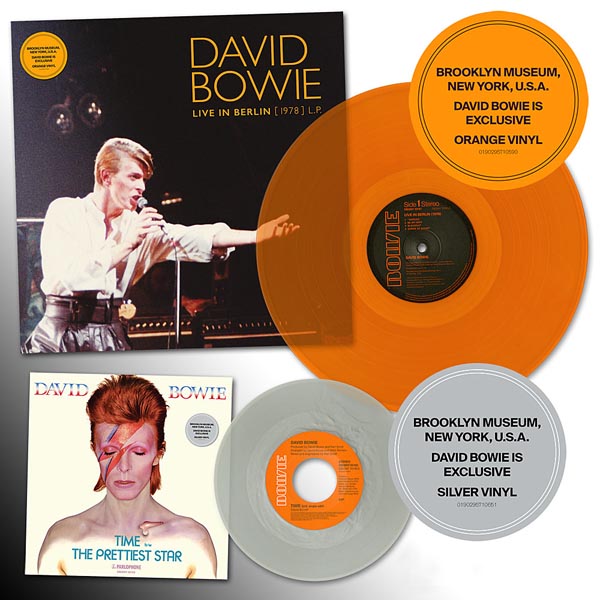 Five years (that’s all we’ve got…) after the David Bowie Is exhibition opened in London’s V&A – having travelled to eight further cities around the globe – it reaches its final destination in Brooklyn, New York in two days time. An apt location, given that David himself settled in The Big Apple.

As with many of the other stops on the tour there will be exclusive limited Bowie vinyl for sale at the Brooklyn Museum. Non-sordid details, following…

There are actually three items, two of which are completely exclusive to Brooklyn.

This is a translucent silver vinyl version of the 1973 Time/The Prettiest Star US 7” single complete with a reproduction of the original ‘undistributed’ picture sleeve.

Perhaps most excitingly given we are in the middle of the 40th anniversary of Bowie’s ‘Berlin Trilogy’ the second exclusive is this eight-track mini-LP on transparent orange vinyl, recorded live in Berlin at the Deutschland Halle, Berlin on 16 May, 1978. Four of the tracks are completely unreleased and the remaining four were only issued within the last six months, three on that blink-and-you’ll-miss-it digital streaming E.P. and one on the B-side of the 40th Anniversary Beauty And The Beast seven-inch picture disc released last month.

The red vinyl edition of the iSELECT album is making another appearance at Brooklyn due to ‘overwhelming demand’. The iSelect compilation features tracks chosen personally by Bowie along with sleeve notes on a fold out insert. This LP has only previously been available in very limited quantities at other David Bowie is exhibition shops. This is an interesting compilation, noted mainly for being the only place to find Time Will Crawl (MM remix), a fabulous version of the song.

I’m delighted to say that I will actually be in New York in a couple of weeks’ time and will of course be taking the opportunity to visit the Brooklyn Museum to see this David Bowie Is exhibition. Obviously, I will be hoping to acquire this exclusives while I’m there…

The David Bowie Is exhibition opens at the Brooklyn Museum on 2 March 2018. CHANGESTWOBOWIE will be issued in April on CD and vinyl LP.