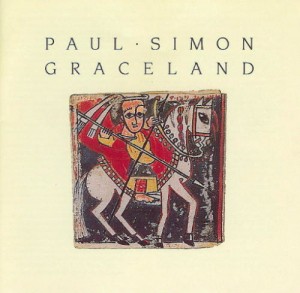 Paul Simon’s classic Graceland album is to be celebrated in May 2012, with an anniversary reissue, 25 years after the album was first released.

No details are forthcoming on track listings at this stage, but we are promised ‘bonus tracks’ on both a 2-disc edition, as well as a deluxe collector’s box set.

In addition to bonus audio, a new documentary film Paul Simon: Under African Skies (directed by Joe Berlinger) is said to feature on both editions of the reissue in ‘director’s cut’ form.

This suggests a CD+DVD format for the 2-disc edition, which would not leave much room for significant bonus audio material. Homeless (Demo), Diamonds On The Soles Of Her Shoes (unreleased version) and All Around The World Or The Myth Of Fingerprints are the three bonus tracks that have been in and out of print over the years. Fans will be expecting something more than a repetition of these on the 2-disc set.

But the real question is whether Paul Simon will open up the archives for complete discs of demos, alternates and live material for inclusion in the deluxe collector’s box. If Sony / Legacy are looking to charge the now familiar super deluxe edition price point of approximately £75 / $120 then one would hope that might be the case.

More details on this forthcoming reissue when we get them, but why not leave a comment and give us your thoughts on what you’d like to see in this deluxe collector’s box set?