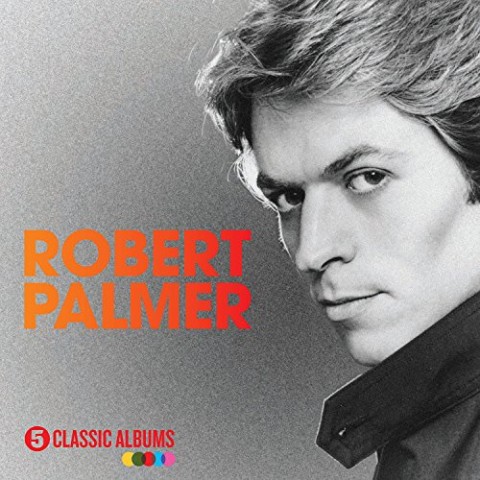 While we wait for Hidden Masters to do a proper job with Robert Palmer‘s Island archive, Universal Music are putting out this frills-free, five-CD box set that benefits from great cover art and a hard-to-argue-with selection of long-players from the Island Years.

5 Classic Albums features Palmer’s fine 1974 solo debut Sneakin’ Sally Through The Alley, and its follow up, Pressure Drop (1975). It skips the mid-seventies offerings Some People Can Do What They Like and Double Fun (the latter includes Every Kinda People) preferring Secrets from 1979 – which includes Bad Case of Loving You (Doctor, Doctor) and Robert’s great version of Todd Rundgren’s Can We Still Be Friends.

The last two albums are the new wave influenced Clues (which includes Renault’s RB favourite, Johnny and Mary) and Riptide from 1985, the album that spawned mega-hits Addicted to Love and I Didn’t Mean To Turn You On. Its subsequent success saw Palmer end his time with Island, seduced by a ‘Godfather’ offer (one he couldn’t refuse) from EMI. Unfortunately, despite a decent start with Heavy Nova, he never bettered any of his Island-era rock/pop efforts on his new label, although the Big Band/orchestral excursions of Don’t Explain and in particular Ridin’ High were very rewarding records.

Assuming Universal have used the right sources for this set (see this post) it’s a bit of a no-brainer for less than £12. If you haven’t dipped your toes into classic 1970s Palmer then you’re in for a real treat.

5 Classic Albums is packaged in a “new slim line slipcase” and is released on 15 April 2016.