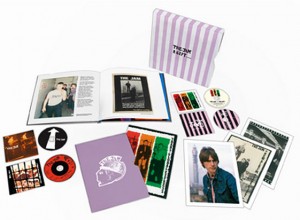 More details have emerged about the forthcoming The Gift super deluxe edition box set from The Jam. The four disc box will include 13 unreleased demos and alternate versions on disc two, while the third CD offers a complete concert from the last ever Jam tour – 23 tracks remasterd. The DVD provides promo clips and various live performances, including a Danish TV special.

The original UK vinyl came in a lilac and white stripped paper back and the outer slip case for this set reflects that design with “The Jam – A Gift” written on it. A nice touch.