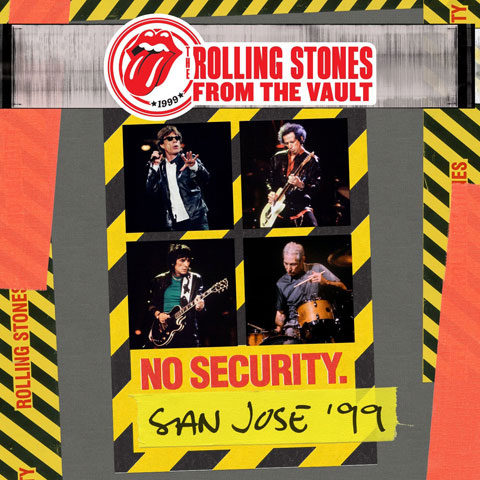 The tour that supported the live album from the previous tour.

After a frenetic schedule back in 2015, Eagle Rock’s Rolling Stones ‘From The Vault’ series has slowed down in recent years, with only one release – 2017’s  Sticky Fingers at Fonda Theatre – in the last two and a half years. But the series continues in July, with No Security. San Jose ’99 which is available in the usual variety of formats.

Two shows in San Jose in April ’99 ended the US leg of the No Security tour before the band moved to Europe for nine concerts in June. The band made a point of playing arenas (not stadiums) on the No Security tour, playing to much smaller crowds than they had in ’98. While still not exactly intimate, the idea was to lose some of the special effects and let the music do the talking.

The set list features some sixties classics (but no Satisfaction) and includes songs like Midnight Rambler, Out of Control, Some Girls and Saint of Me.

No Security. San Jose ’99 will be issued as a 3LP vinyl set (coloured edition is only available in North America), a 2CD+DVD package and on blu-ray and DVD on 13 July 2018. Note that the blu-ray is an ‘SD Blu-ray’ indicating that the footage is standard definition, therefore with the 2CD+DVD package you aren’t really losing anything in terms of picture quality.