The pair are of course Dieter Meier and Boris Blank and Point is their 14th studio album, following 2016’s Toy.

Describing their approach to their art, Blank says “I compare our music with visual worlds. I am a sound painter who works in his studio all the time.” You can hear a preview of Waba Duba, below.

According to the label, POINT takes the classic Yello sound of records like Stella, One Second and Flag and “twists it into something ultra-modern.” It is “part spy film, part Dali-painting, part strobe lit dance floor, part 4D car chase and part deep space torch song. It’s Yello, absolutely on point.”

POINT is available on CD and vinyl, but note that JPC in Germany have a special limited collector’s box which includes three bonus tracks on the CD, a concert recording of the Montreux Jazz Festival in 2017 on blu-ray and DVD, a vinyl picture disc of the album and a signed and numbered 12″ x 12″ art print. It’s not clear at this stage whether that’s exclusive or if it will end up anywhere else (Update: It appears to be a German exclusive, but not a JPC exclusive). 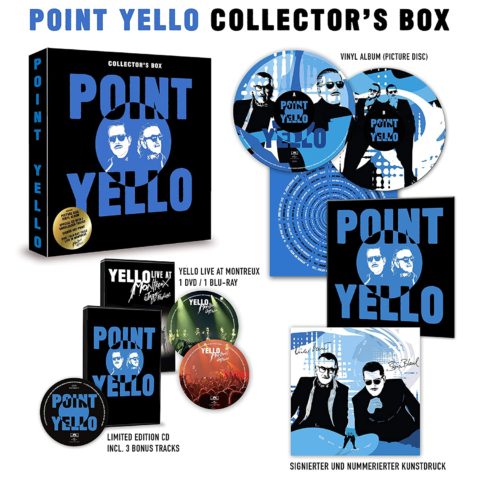